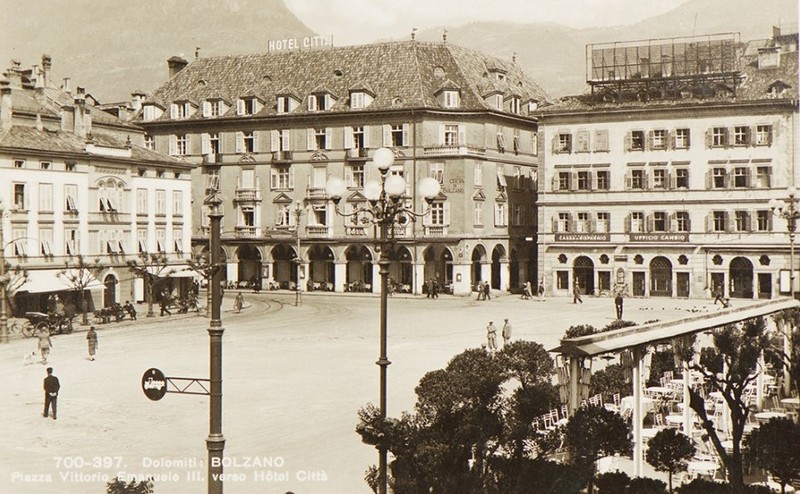 In the XVIIIth century, it was the headquarter of the offices of Curia Arcivescovile of Trento and Bolzano, then it was a school by the will of Imperatore Giuseppe II and, from 1913, the Hotel Città of Bolzano presents itself in all its grandeur with a façade with balconies in typical atesino baroque. In front of its windows, there is the main Piazza Walther, with the Cathedral and the beautiful openwork tower, and the bar under the ground floor arches, named “Caffè Grand’Italia” during fascist era, was always destination of a celebrated clientele. Then the war came and the Hotel Città was respected also by the bombs. 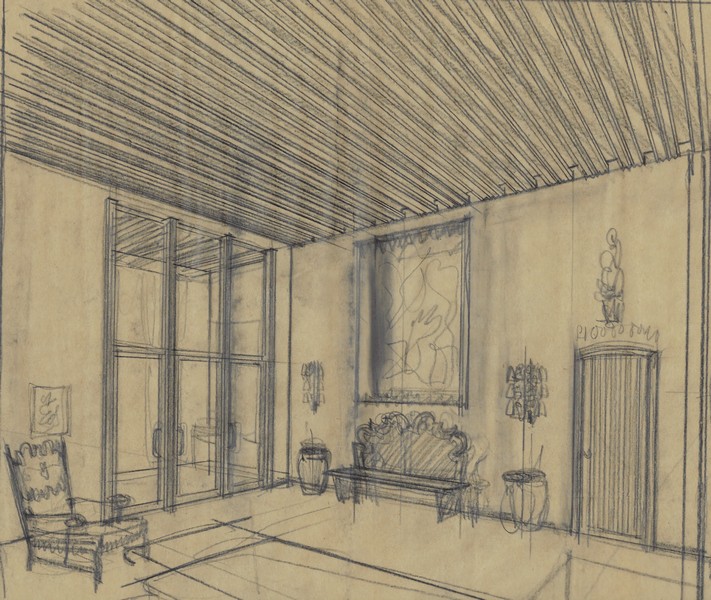 The bombings left intact the high halls, with three meters walls coated with Veronese yellow marble, the doors in Salisburgo grey and the fireplace at the center of the large hall, formed by large stone vestments and a floral decoration on glazed tiles, by Paolo Buffa (Milan 1903-1970), part of a larger interior design project that involved various areas of the ground floor, including the bright entrance vestibule. 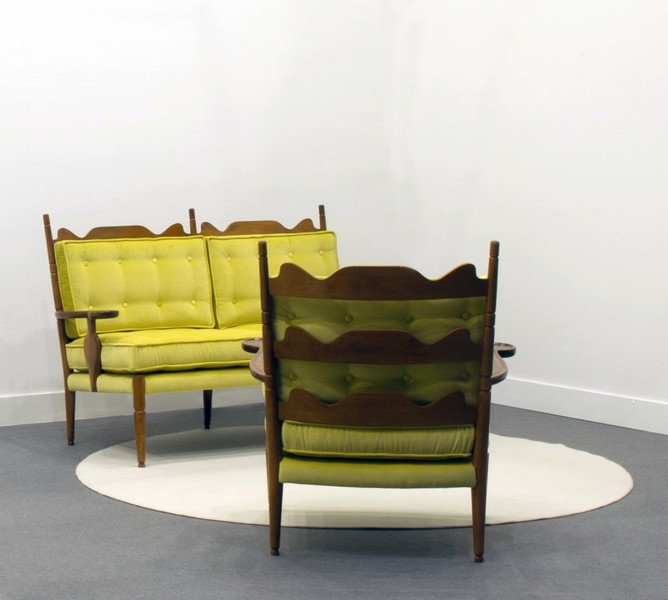 Commissioned to the milanese cabinetmaker Mario Quarti, the entire furniture included an armchair and a bench in this area, immediately replaced with a two-seater sofa, characterized by confortable seats and armrests with deliberately wide circular terminals, such as to be able to welcome an ashtray or a glass, replacing the most common and sometimes cumbersome coffee table. 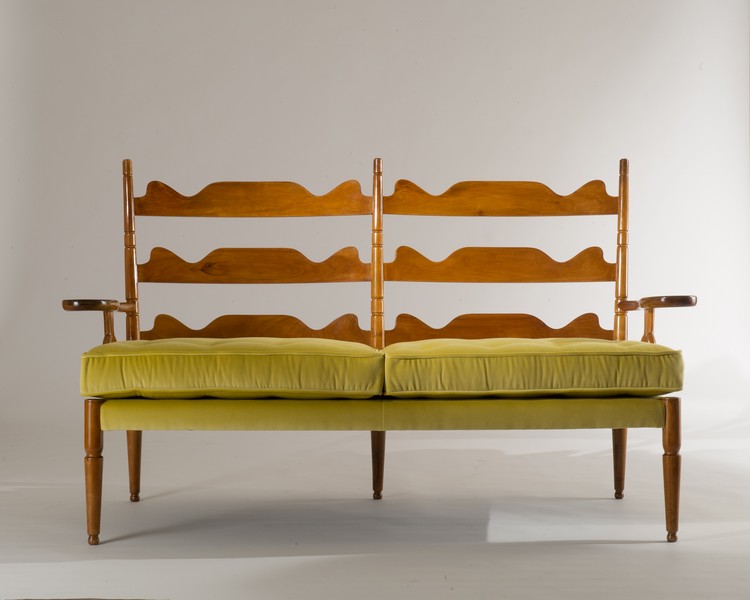 The structures in turned solid walnut with backs marked by a triple band shaped according to a delicate curvilinear design, host some cushions, which were originally coated with tobacco-color leather and hopelessly worn by the use and wear of time. They have been replaced by a soft cotton velvet with perimetral and button-stitched profiles following the original arrangement of the project. 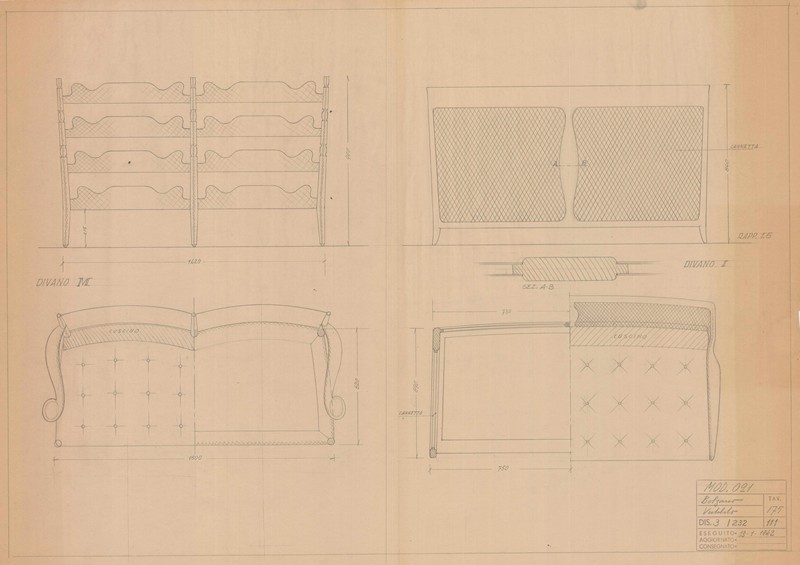 The project dated 1942 and inventoried as mod. 021/M expected also a variant, also with two seats, which has never been realised. 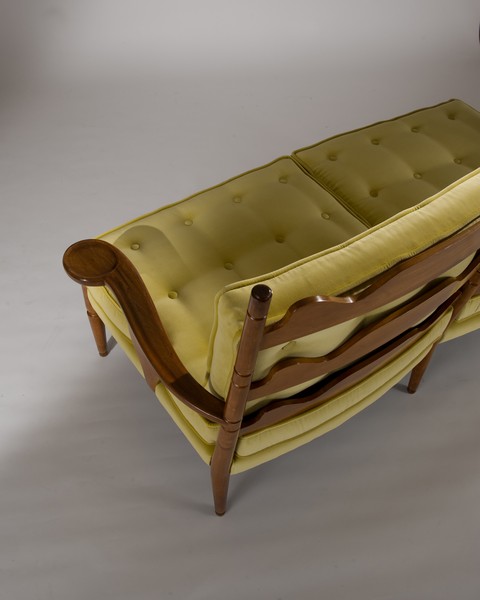 The design of the armrests is surprising, a true stylistic signature of the project, with their sinuous course culminating in a large roundness suitably carved to put an ashtray or a glass, inevitable companions in moments of peaceful conviviality. Objects, gestures and atmospheres, to mark the slow time of conversations and waiting in a refined city hotel. 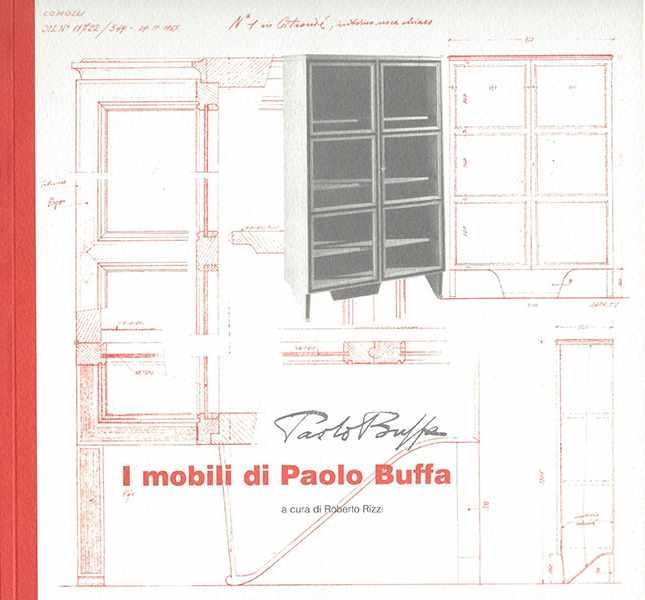 Paolo Buffa was probably the most loved architect by the milanese middle class. It was active on the public scene since 1930 with his participation at the Triennale exhibitions and then he was called by Ico Parisi at Broletto in 1946 and by Fede Cheti in 1948 for the exhibition Lo Stile nell’Arredamento Moderno. He dedicated all his life to project homes, shops, restaurants, yachts, furnishings for a clientele who was culturally prepared to understand the refined elegance of his design. To his works, ample prominence was given by the specialized press of the time. The volume I mobili di Paolo Buffa, published in 2000, represents an homogeneous synthesis, in addition to deepening the architectural works, the interiors and the single furniture with many documents and illustrations.

Come to discover this amazing history of Italian creativity in our historical department and in our bookshop.