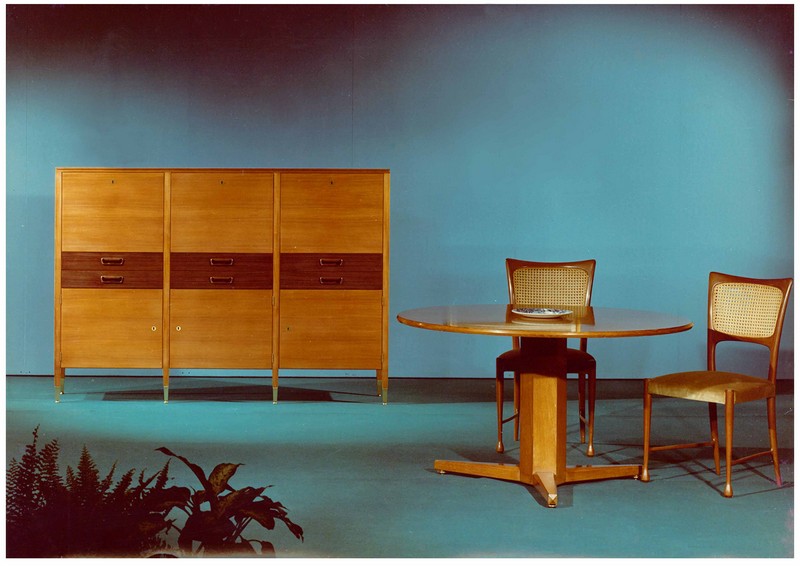 There was a period, in the second half of the XX century, which was characterised by the clear statement of the Scandinavian design (Denmark, Sweden, Finland). That simple and functional furniture, executed in teak or birch clear wood, was confortable without flaunting and it looked like something really new and original. The public appreciation was so wide that our architects could not stay insensible in front of a similar taste changement and looking for an “Italian answer” to this new orientation. The answer of Paolo Buffa (Milan 1903-1970), architect already affirmed on the Milanese context thanks to his projects delicacy, did not wait: clean and dry volumes with some refined “wriggle”… 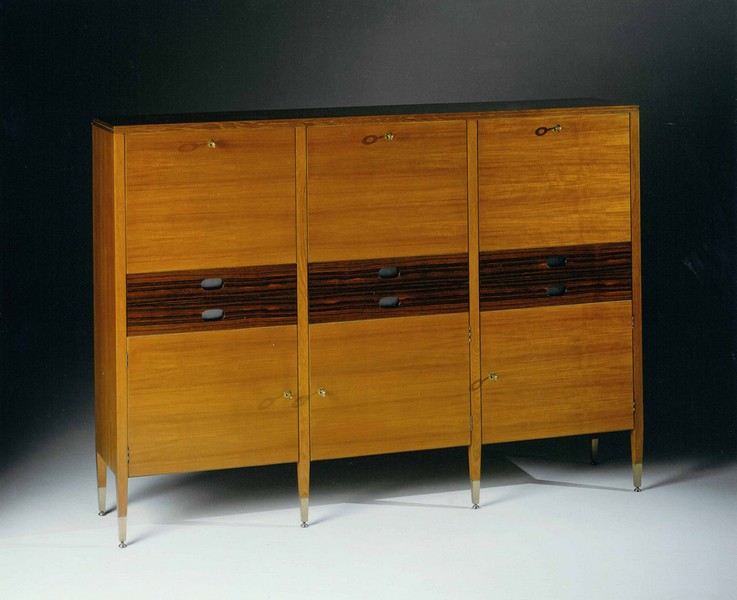 In this storage unit, which is part of a wider dining room project, the volume has an important dimension but it is not intrusive; the blond teak wood is revived by contrast by a double band of rosewood drawers with a recessed handle and finished with a plate of aluminium, which is considered a “new” material compared to the more traditional brass used for keys and tips. No relief, no protrusion, no shape but a skilful game of "shutters" to align every single component according to an overall mathematical design. 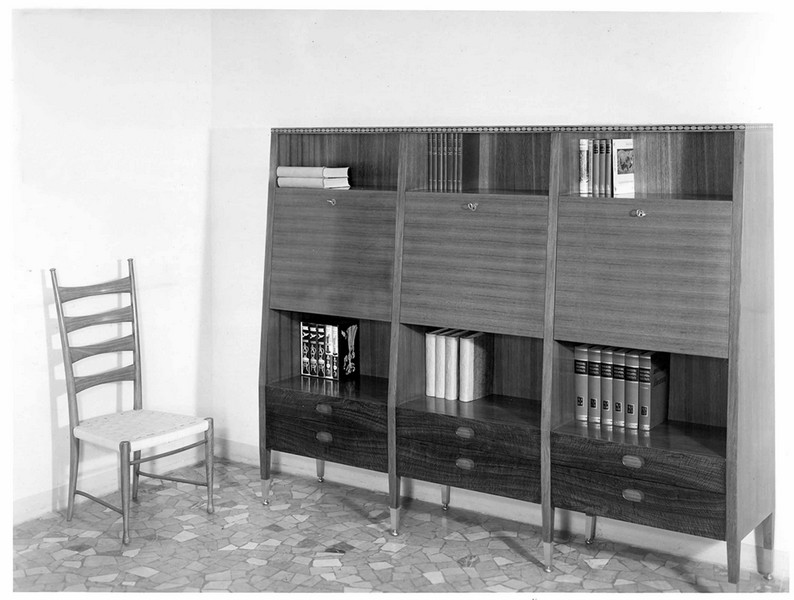 Manufactured in 1957 in Cantù by Marelli e Colico, the same furniture knew at the hands of Buffa a singular variant with an inclined and tapered upwards side. It was an unique and rare case and this volume also lightens due to the numerous compartments left open, positioning the storage body with three folding doors in the center and moving the double band of drawers downwards to conclude the alternation between full and empty spaces. 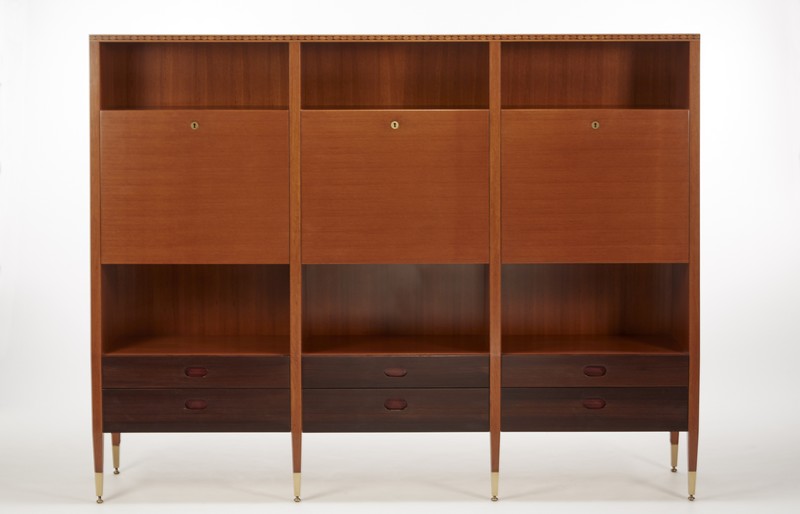 The teak wood with the usual amber reflections takes on others tending to pink and red, establishing new relationships with the drawers rosewood and especially with the maple wood inside the storage volumes.
No relief, no protrusion, no shape but fulls and empties, lights and shadows compose a new projectual alphabet on a furniture which has become a real domestic architecture. 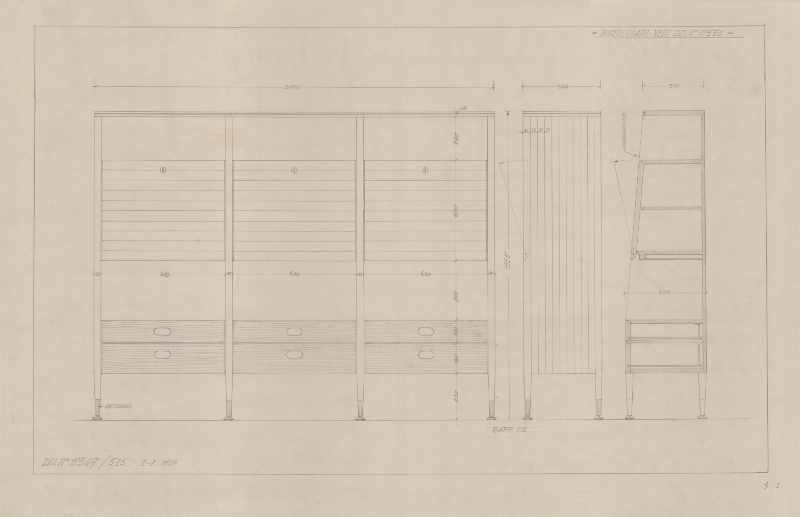 Also this was projected and manufactured in 1957 and it is evident the tough horizontal connotation wanted by Buffa, mindful of the Scandinavian “sideboards”. That which surprises the most is the relationship between the two sides project: the volume purity in the first case and the bold cut in the second; the “wriggle”, indeed… 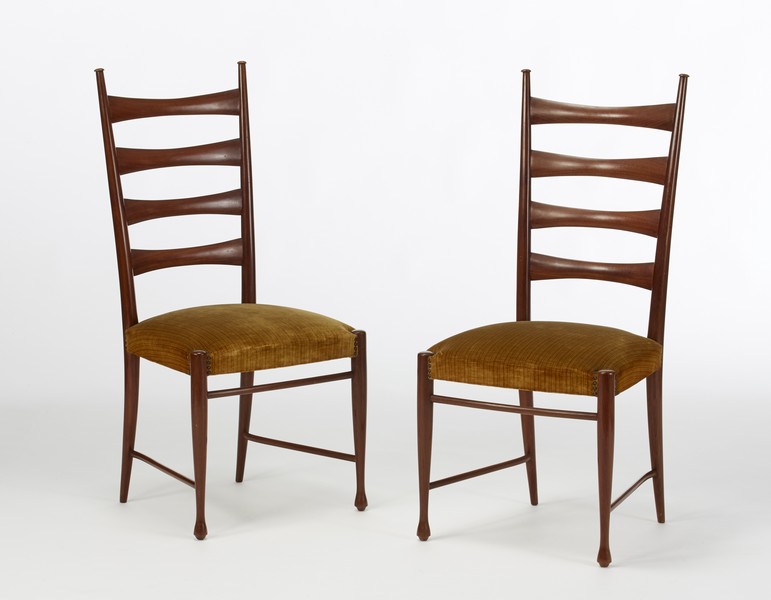 In the archive photo the furniture is curiously associated to a chair with an high back marked by shaped horizontal crosspieces. The not random matching also reveals an evident charge of modernity in the chair, typical of this transition period; dated 1955, it was expected with a low or high seat, for an entrance or table chair, like in this rare pair with mahogany wood structure and seat upholstered in original ribbed velvet in yellow gold. 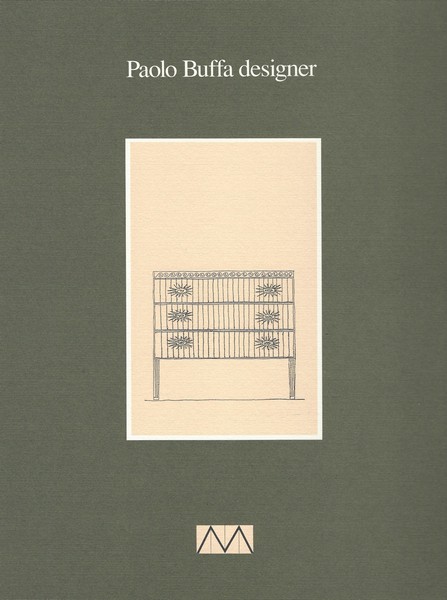 Paolo Buffa is considered one of the most important architects in the Milanese context. While dedicating himself also to the realization of architectural works, mainly villas and residential buildings, he will reserve his best energies to the furniture design, making it a true identity trait. He was ambassador of a typically Italian culture attentive from the selection of materials to the perfect execution, always entrusted to the skilled hands of the most qualified craftsmen. In the volume "Paolo Buffa Designer – 30 opere dal 1939 al 1968” published in 1993, the richness of the union between intellectual and executive skills is evident: the knowledge and ideas of the architect with the technique and use of materials of a craft workshop.

Discover this amazing history of Italian creativity in our historical department and in our bookshop.