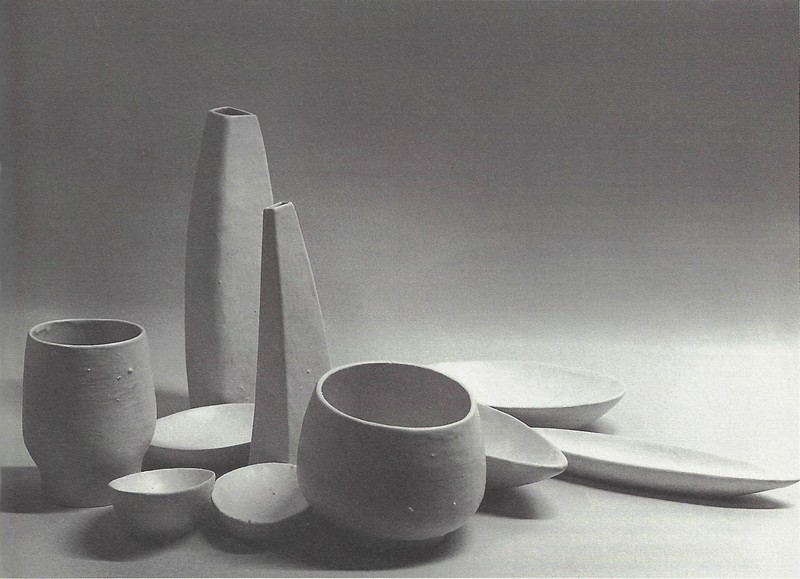 When Bruno Danese (Valdagno 1930-Milan 2016) announces at his friend and countryman Franco Meneguzzo (Valdagno 1924-Milan 2008) his intention to move to Milan to start a productive and commercial work, one of the most representative Italian design cases borns. In November 1955, the DEM (Danese e Meneguzzo) company, specialised in handcrafted ceramics, officially starts its activity. The research and the experimentation will be a Meneguzzo obsession during all the DEM (1955-1957) short life, explaining the incredible quantity and variety of realised objects: initially thick, elliptical, asymmetrical shapes, marked by minimal decorative interventions. 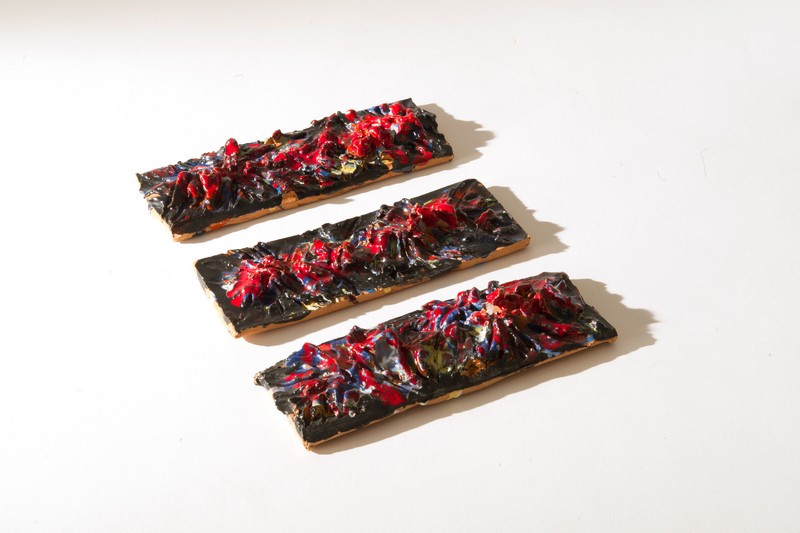 Simultaneously with the shaping exercises, Meneguzzo experiments with new yields and enamel effects, pushing himself to a sort of "material dripping", as in this rare tris of tiles with a bright decoration and an informal subject, which was expression of the period linked to the production of unique pieces.
The latter are soon destined to give way to a more organized and repetitive production made with casting techniques. 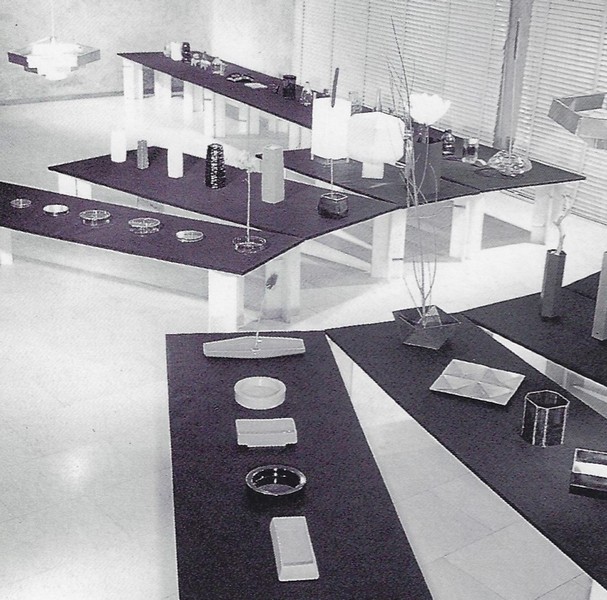 DEM company cease to exist from the second half of 1957, opnening the way to that company which will become the famous Danese, with Meneguzzo helped by new designers, like Bruno Munari (Milan 1907-1998).
The latter will be the principal architect of the turning point in the direction of "editions", which will not exclusively be aimed at the creation of ceramic objects, but they will be part of a new horizon of products and materials, both natural and artificial. 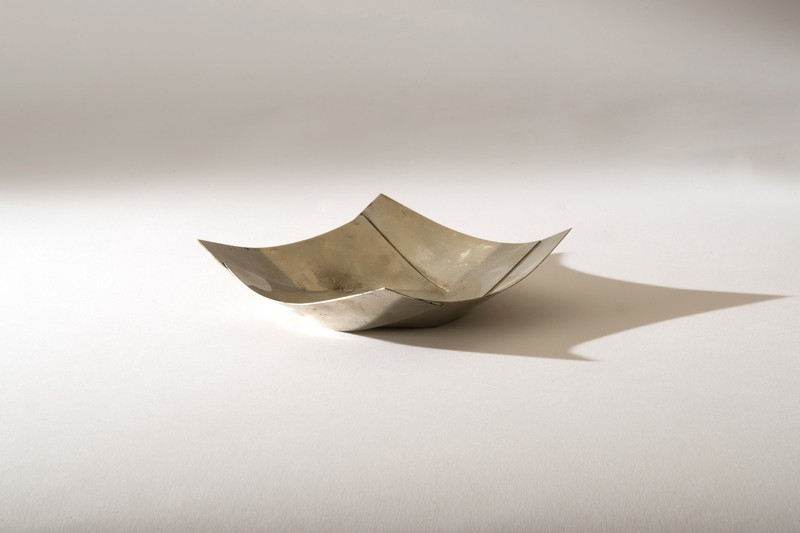 The research around the “simple form” able to ferry the object of common use towards the contents of an art work will inspire Munari to the creation of a containers/trays series, suggestively called Maldive.
They were realised in 1960 in three different sizes, cutting, folding and welding an unique sheet of “alpacca”, which is a shiny metal alloy very close to the silver. 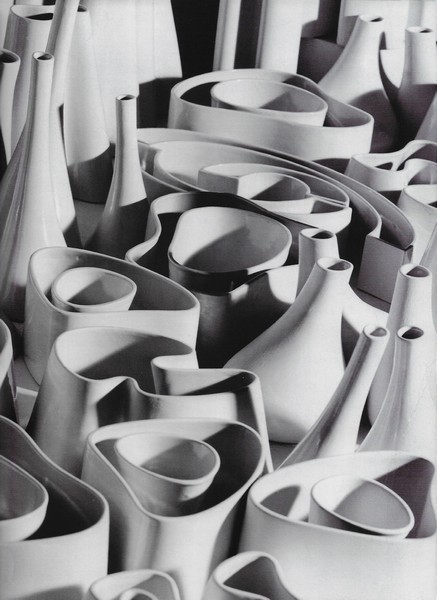 The shape, investigated also in its extreme plastic possibilities, will always be a research object by Angelo Mangiarotti (Milan 1921-2012), called to work with Danese for a short period from 1963 to 1965.
During this time, he experiments free and complex shapes with casting techniques, approaching the concept of family of objects, also recreated according to the principles of modularity. 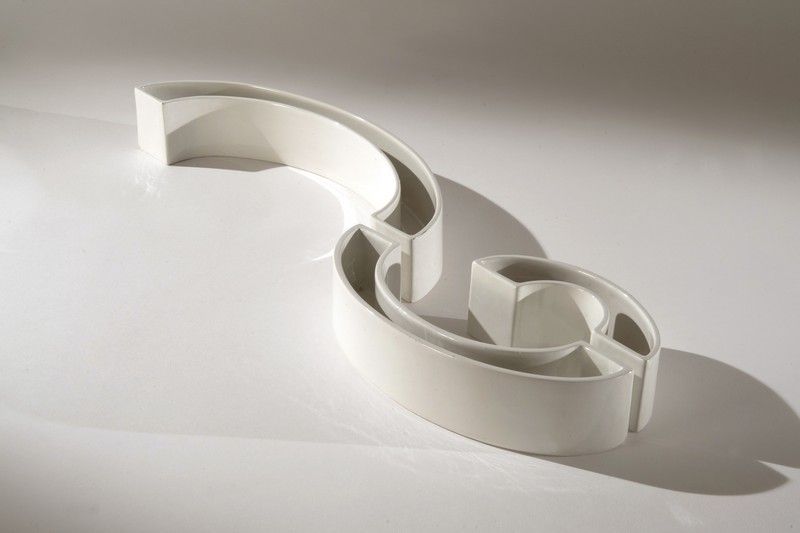 The series of small Tremiti containers dates back to 1964, produced with the soft and malleable "terra di Vicenza", which is made liquid and poured into plaster molds and then finished enameled in white.
Each object is different from the other due to the deformations during processing that become an integral part of new undercuts. Modularity and composability will be the hallmarks of this variable conformation ceramic project. 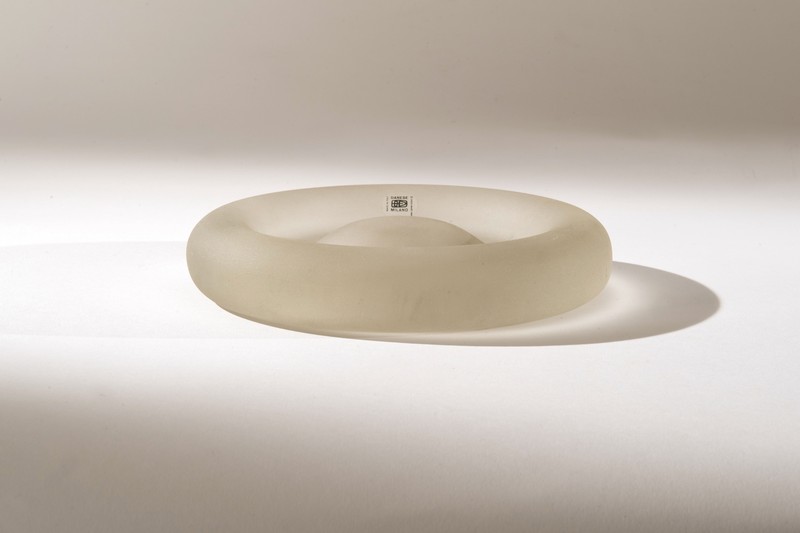 Also for Enzo Mari (Novara 1932 - Milan 2020) the relationship between form and technique will be the testing ground for countless projects. From his beginnings in 1957 and for decades, he will design objects and products that will go down in history. One of the most loved, also because it is available in multiple versions, is the ashtray theme: as in the 1979/80 Delos model, in pressed and frosted glass, characterized by a wide double border that prevents the cigarette from falling out of the ashtray. 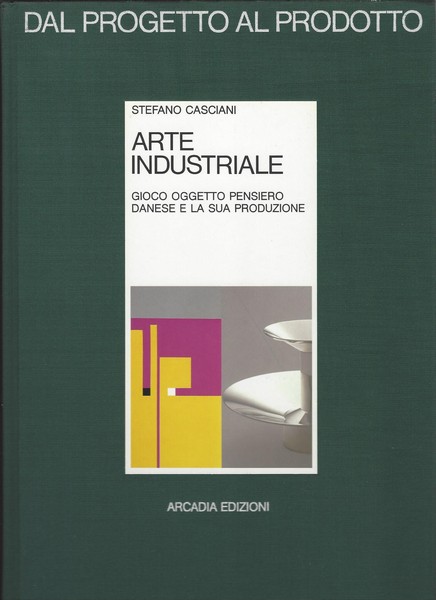 Considered one of the most sophisticated cases of the italian design, the work of Danese with its designers can be found in the book Arte Industriale. Gioco, Oggetto, Pensiero. Danese e la sua produzione, considered the only catalog raisonné of the production. At the end of the chapter dedicated to the books, there is an "illegible book" designed by Bruno Munari specifically for this volume, as a visual comment on the Prelibri, and made up of eight printed sheets.

Discover this amazing history of Italian creativity in our historical department and in our bookshop.